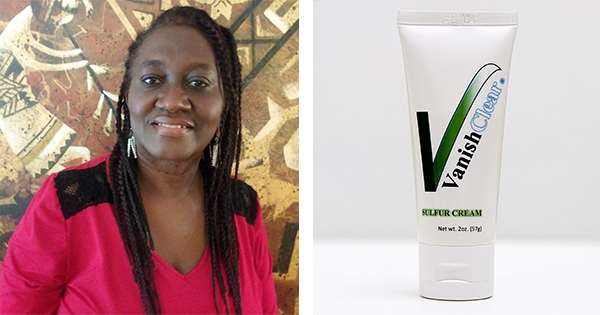 Nationwide — Mizell Mais is an African American mother of three and an entrepreneur from Apopka, Florida. In her early thirties, she developed a spotty rash that covered more than 40% of her body, including her face. Being dark-skinned, the rash was much lighter than her natural complexion, and the itchy spots were flaky and dry. The rash is called Tinea Versicolor. It’s caused by an overgrowth of fungus that naturally occurs on human skin, and is most prevalent in humid or tropical climates.

“I was embarrassed to go anywhere, so I had to really pack on the makeup and powder before I left the house,” Mizell stated in an interview. “Doctors gave me a variety of lotions, soaps, powders, and salves, but there was very little results. It wasn’t until I started reading everything and doing my own research, and through trial and error, I developed VanishClear Sulfur Cream in my kitchen. I saw a visible difference in four days, and the rash was completely gone in nine days. I didn’t have any discoloration or scarring or anything.”

While Tinea Versicolor is not life-threatening, it can be very uncomfortable because it itches as it spreads on the skin. Many that suffer from this fungal infection try to cover themselves so as not to attract attention to themselves, as it can affect one’s social life. Some “old heads” have come to call this condition “acid” because it looks like drops of acid on the skin.

Mrs. Mais commented, “I have my confidence back, and kept it with my cream. I wear very little makeup, and I go wherever I please without worried about people staring at me. I’ve gotten so many testimonials and positive responses of thanks for helping people and their families. They took back a part of their lives that they thought they would have to live without.” Aside from being a mother, VanishClear Skin Cream has been my proudest creation.

About Tinea Versicolor
Tinea Versicolor (Pityriasis Versicolor) is a fungal infection caused by a yeast or fungi that naturally lives on the skin. When this fungus grows out of control it appears as discolored spots that are lighter or darker than your natural skin tone. These spots join together to form large patches that are itchy, dry, and flaky. The condition is not contagious, but it is very bothersome.